Free Shipping To All 50 States

March is Women’s History Month and what better way to celebrate than to take a walk down memory lane with some of the wild ads that were designed by men to shame women for their bodies, and then sell them the solution! Of course not everything has changed — women are still held to impossible and ever-changing standards when it comes to how we look (and smell — society still hasn’t learned that vaginas aren’t meant to smell like flowers). 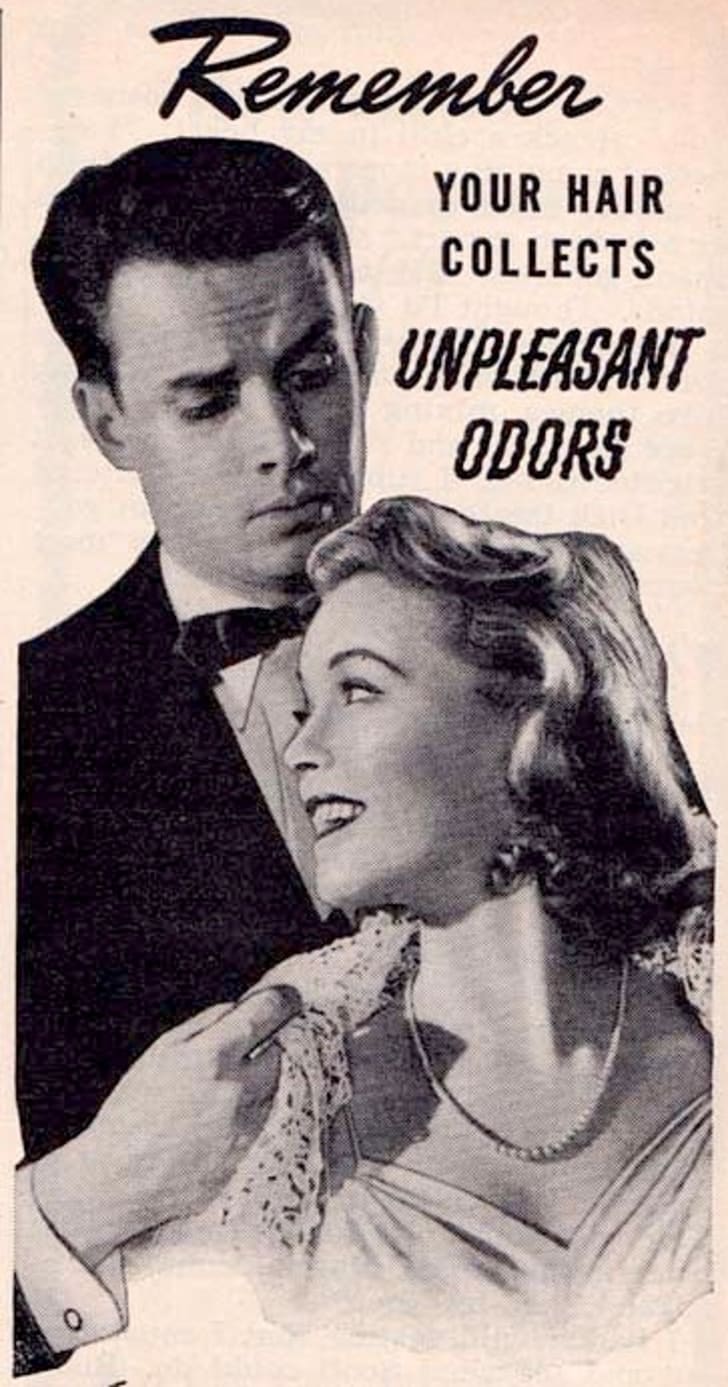 This ad from the 1930s gave women yet another odor to worry about—the smell from their hair. Dancing was an important social activity and shampoo companies wanted women to be acutely conscious that a man may be nose-level with their hair.

2. What about below your waistband? So your hair is clean and smelling of roses, but what’s going on down below? Lysol was a best-seller as a “feminine hygiene” product, but many people don’t realize that “feminine hygiene” was often used as a euphemism for contraception before birth control was legalized in the US in 1965. Despite ads describing Lysol as “safe and gentle,” it was anything but. The chemical ingredients damaged the uterine lining and by 1911 doctors had recorded 193 Lysol poisonings and 5 deaths from its use as a contraceptive. The worst part? It wasn’t even effective at preventing pregnancy—in one 1933 study, 250 of 507 women using Lysol still ended up pregnant.

3. Don’t be careless if you want to keep your husband! Forget communication, emotional intelligence, or balancing a budget — the most important thing is to stay on top of your feminine hygiene! Oh, and to be endlessly cheerful, of course. Most of us are more than familiar with marketing that polices our weight — ads offering “cleanses,” specialized workouts, and skinny teas are all over social media. But when was the last time you saw an ad telling you to gain weight? The thin Flapper silhouette went out of style during the Great Depression when many people struggled to put food on the table. The marketing pivoted to shame women for the same figure that they praised just a decade earlier.

5. There is such thing as too big, though It’s strange to see an ad for a product claiming to reduce your breast size when we grew up with “bombshell” bras and “chicken cutlets.” What makes this ad especially egregious is that it’s not advertising shapewear — this ad is for a cream that lifts and shrinks your breasts! We don’t have to tell you that that’s pure snake oil. Did we say your breasts should be smaller? Now they should be bigger! (P.S. Anyone else sick and tired of their bodies being compared to fruit?)

These marketers didn’t have much faith that men were offering empathy and support to their menstruating partners — let’s do better!

8. And finally, if you didn’t have enough to worry about… Sign up to receive fun updates, promos and sneak peeks of upcoming products to get 1 free month of subscription.